Kodak. Nokia. Xerox. Myspace. Sears. Toshiba. RadioShack. Motorola. Toys“R”Us. AOL. What do all these companies have in common?

They were all well-known, seemingly indestructible, and then ultimately died, were sold, or went bankrupt. While these companies accomplished some very great things during their lifetime, the sad fact is that they will likely be remembered most for the manner of their demise.

Their stories do not represent how any organization wants to be remembered, and for the business leaders focused on ensuring their company’s vitality for years and years to come, companies like these serve as cautionary tales begging one question: What caused these once-stalwart organizations to implode while others endured?

The single most critical factor was their failure to innovate at the right time and/or in the right way. 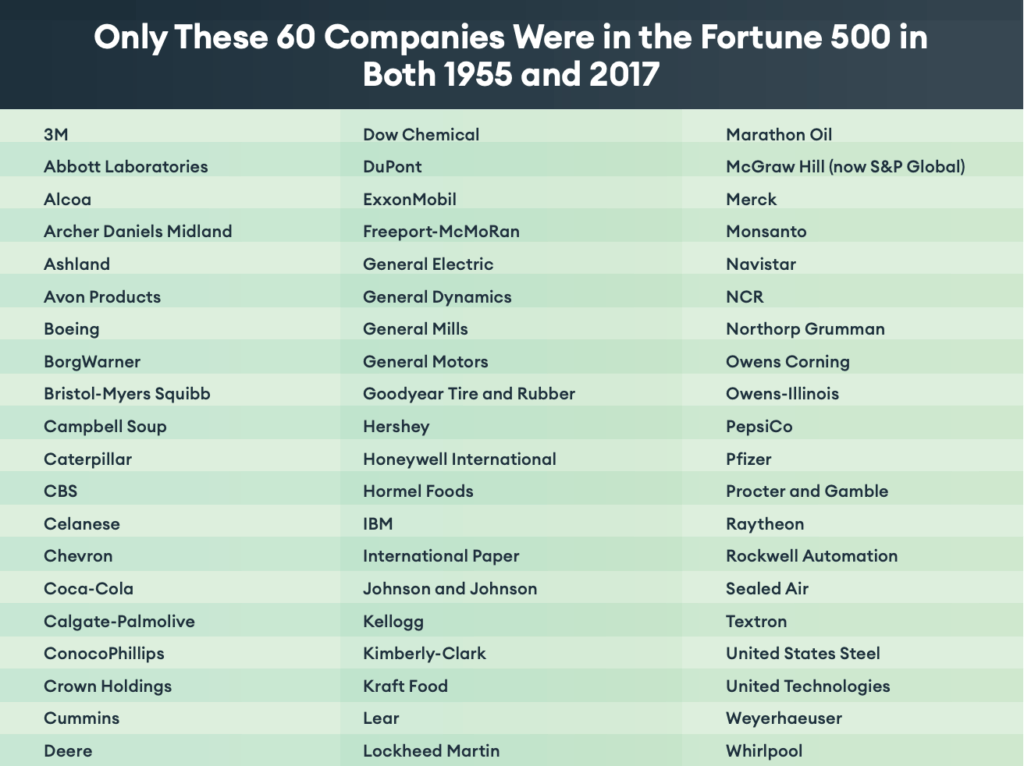 The Problem: Neglecting the Core

According to the American Enterprise Institute, there were only 60 companies on the Fortune 500 list in 1955 who were still on the list in 2017.  This statistic illustrates what can happen when leaders of large enterprises fail to implement what we refer to as “core-driven” innovation.

Simply put, “core-driven” innovation is strategic innovation led by the time-tested truth that, over the long-term, the core revenue streams of larger, more established companies will be challenged and compromised by outside forces. Edmund Burke said the most powerful law of nature is change, and technology has only dramatically sped up the pace of change. According to Michael Porter of the Harvard Business Review, these 5 famous forces also strategically play a role: When faced with the destructive potential of technological change: competitors, new entrants, globalization, substitute products, generational shifts, and more, established companies must continue to innovate in order to maintain their competitive advantage. And they innately know that, as Fannie Mae’s Chief Operations Officer, Kimberly Johnson, puts it, “the risk of not innovating is just as high as the risk of innovating, if not higher.” But for large, enterprise-sized companies, innovating at a deep level is easier said than done. Here’s why.

For large, highly profitable companies, a natural by-product of their enormous success is that they inadvertently, almost imperceptibly become stuck in the middle of two different sources of risk.

On the one side, there is the strategic risk to their competitive advantage that increases as they continue to grow but fail to build internal capabilities that will allow them to benefit from new markets and new customers. And on the other, there is the risk of allocating resources and focus away from those established business functions, structures, and processes that, over time, have served their customers’ needs and made them successful in the first place. As Clayton M. Christensen suggested in his book, The Innovator’s Dilemma, over the long-term, companies double down on their existing value chains in an effort to extract every drop out of what they fail to see as a diminishing strategic position.

Companies do this at the expense of building internal capabilities allowing them to pivot towards the emerging markets that will sustain long-term growth and prosperity. Companies get big enough, but don’t stay small enough to adapt.

A prime example of a now-deceased company that, stuck between the two different risks, steered away from strategic, core innovation is Kodak. From a $10B company listed on the Dow Jones Industrial Average in 1981 and ranked as the No. 1 seller of digital cameras in the U.S. in 2005, to filing for bankruptcy in January of 2012, Kodak is just one of many examples of companies that, although they appeared to be dominating their market, did not innovate strategically to address the fundamental changes in the way their customers created, processed, and shared digital media.

The challenge for so many companies like Kodak isn’t so much that they fail to acknowledge the need to innovate at a core, strategic level. Instead, the challenge for these organizations’ leaders is to identify and effectively utilize tools and practices that allow them to engage in strategy-minded, core-driven innovation while, at the same time, manage the operational and fiscal risks associated with allocating resources to new ways of doing business.

Defeat B.O.C.O. – Your Product Depends on It

UI/UX Principle #37: Design is a Process, Not a Singular Event

The Benefits of Negative Comments and Bad Reviews

Creativity is the highest form of intelligence

Innovation often occurs on two extremes. Can you do it in the middle?