October 21, 2015 has come and gone, and Back to the Future is now in the past.  We’ve seen a number of articles about hover boards and power laces.  And we tip our rainbow-colored hats to the engineers who made each of these a reality.

Science fiction often inspires science fact (with more goodies on the way). But what did Back to the Future Part II anticipate about the way technology influences our culture?

Robert Zemeckis and Bob Gale accurately foresaw the ubiquity of screens in our life in 2015. We see two people in Cafe 80’s, snubbing each other in a public setting while watching personal screens. While smartphones do not make an appearance the film, Marty McFly’s children spend the majority of their screentime with faces buried behind optical head mounted displays. From head to toe, the citizens of Hill Valley in 2015 are covered with wearable tech, envisioning the spirit of ubiquitous computing. They missed the internet, along with the internet of things. But apart from wireless information exchange, the essence of wearable tech is captured through a combination devices including self-drying jackets, bionic implants, visor displays, and best of all, a vest with a button that plays chicken sounds. 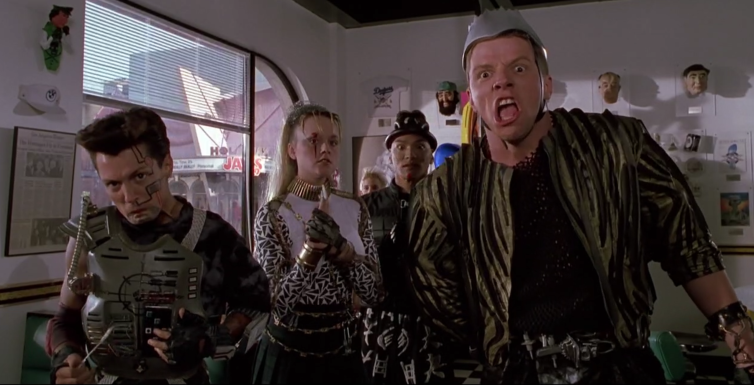 Someday a virtual Michael Jackson will be my server and ask for my choice of beans, chicken, b-b-beef or pork. Unfortunately, that day will not be in 2015. No King of Pop yet, but in Los Angeles, McDonalds customers can be served by an automated kiosk in much the same way. Self-checkout options are routine in grocery stores, and billions of transactions are made online each year. It’s easy to breeze past this one because of the pervasive level of e-commerce, which has been around for years.  But what would a visitor from 1985 think about placing an order for same-day delivery of Pepsi Free from a wireless, handheld, touchscreen device? So what have we learned?

Our world has changed in more profound ways than achieving the ability to fly around traffic in our mag lev-converted DeLorean. Technology changes us, just as we change technology, and it’s moving at an ever increasing rate. As we navigate through this flux, we don’t need a time machine to follow Doc Brown’s lead and strive to gain a clear perception of humanity … the pitfalls and the possibilities.  The perils and the promise.  Perhaps even an answer to that universal question, why?

And remember, your future hasn’t been written yet, so make it a good one!

Fresh for the Future

Do you need help keeping your digital presence fresh for the future?  Our developers, designers and consultants understand the interplay between culture and technology.

Previous “Like Christmas for Creatives”: Halloween the Fresh Way
Next UI/UX: Balancing Creativity with Convention

The Future of Education

The Risk of Not Innovating

A Holistic Approach to Websites